While the week in the QQQ’s may have felt bad because of Wednesday’s big declines, by the numbers the week closed where the prior week opened. This was also true in the IWM. The SPY closed a modest .5% lower than the prior week’s open. With that perspective it was a week of consolidation, but it did pull the QQQ, SPY, and DIAunder their 50 DMA and briefly under their early March swing lows.

In the bullish hand, the IWM, did not touch either its 50 DMA or its early March swing lows, and essentially held its “breakout” trend line that begins on the low of 2/2/15. The IWM is the leading index and continued to lead.

If you draw a trend line from the 10/16/14 low to the 2/2/15 low you’ll find that this week landed exactly on that trend support and the high of the first day of the year (no surprises there if you’re a follower of our calendar ranges work).

You’ll notice in our new position summary table that EA was the All Star of the week with a 1.7% gain in the face of strong head winds and it even gained two positions in TSI rank.

With the QQQ’s pull back last week we decided to look at the stats on how profitable it would have been in if one had started new investments in the model at times when the QQQ’s dropped below and then rose above the 50 DMA. We’ll share the good news in Tuesday’s live coaching session! See you there – Tuesday, 3/31 at 4:30 – 5:30 pm ET.

For daily performance updates of the model positions and top 25 ranking stocks see the Model Portfolio section of the member area. If there are any changes to positions from stops or targets being reached, we’ll email you.

Below you’ll find your summary of weekly and longer-term performance with news highlights and price action analysis for each of the positions. 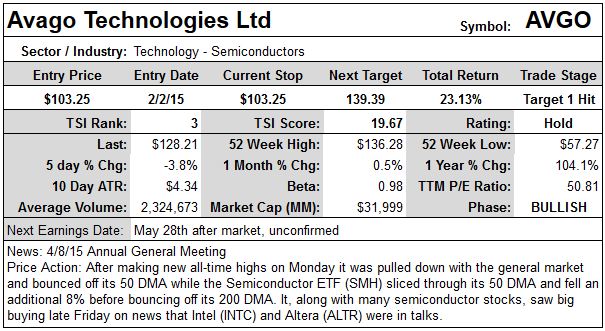 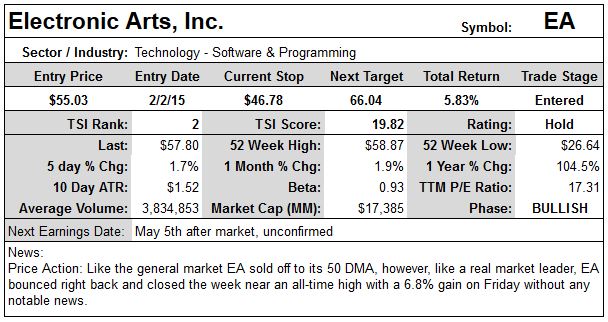 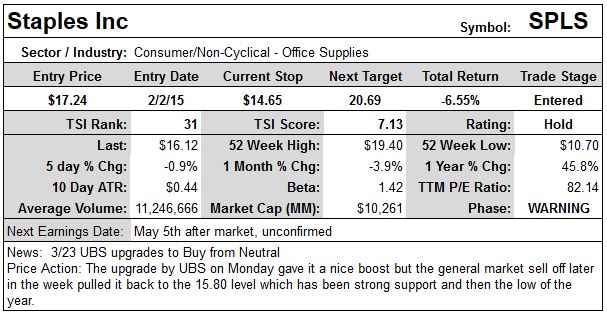 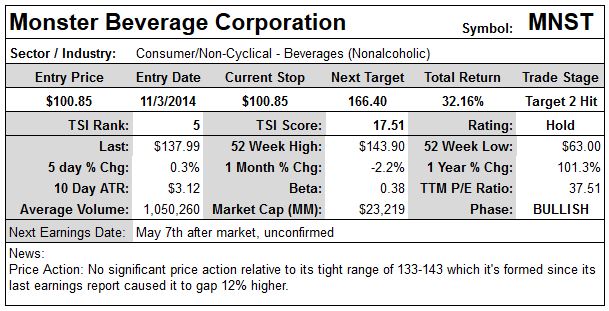 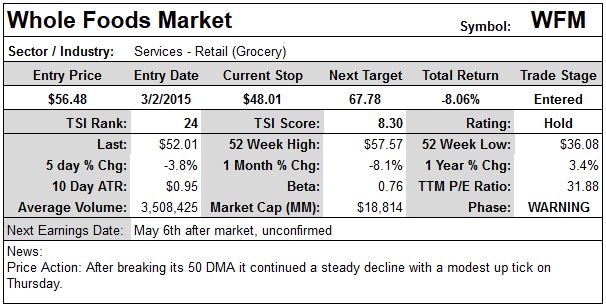 The Current Condition of the Model

In other words, if the position is at risk of being rotated out (replaced) then it will be rated a ‘Hold’. The NASDAQ All Stars are strong stocks that move around a lot and they will very often positions in this condition recover to become ‘Buy” ratings and go on to be great trades. Therefore, they should not be sold just because they’re at risk of being rotated out at the end of the month.

As you should know, we consider new candidates for position changes on the last trading day of the month. That day is Tuesday of the upcoming week, and it appears very likely that SPLS and WFM will be replaced with new positions. I can say that they are likely to be replaced because their current TSI rankings are 30 and 20 respectively which is well below the top 5.

If these two were to be exited now they would represent a loss of 6.6% and 8.1%. This compares favorably to model’s historical average loss of 10%.

I won’t speculate on which of the several very close candidates will win, but regardless of which ones do it looks like we’ll have a very high momentum group going into next month. The 3 positions that will most likely remain in the portfolio, AVGO, EA, andMNST all have solid gains and market leading trends intact.

For more information about the current and closed positions go to the Model Portfolio section of your NASDAQ 100 All Stars member area.