The ETF Country models were both negative on the week closing down between 1-2%, trailing behind the ACWI index which was basically flat on the week. Asian equities continued their slump from the highs they put in towards the end of May.

Despite the down week the models are still performing well for the year.

The U.S. markets, after reaching several new highs in the major indexes on Thursday, retreated on Friday. The status of Greece remains a hot subject. There are a number of important deadlines in the coming days and weeks that should help determine if a compromise can be reached with its creditors or if the country will decide to default and/or depart from the European Union.

There were no positions changes this week. We remain heavily concentrated in Asian ETFs. 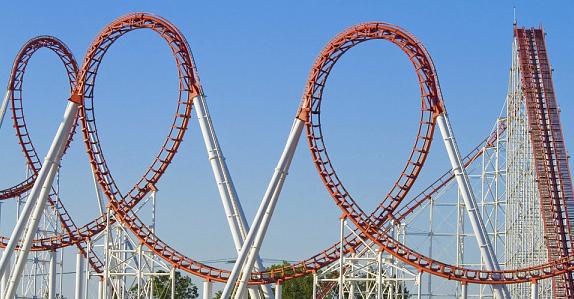 With the recent rollout of some additional trading options for our trend strength-based ETF models, particularly the Sector variants, we have been going through a series looking at the new Sector Moderate models and specifically looking at how the stops and targets alter the risk/reward characteristics. Last week we compared volatility differences, this week we are going to focus on comparing drawdowns.

What is a Drawdown?

It would probably be helpful to review the basic definition and characteristics of a drawdown. A drawdown occurs when your equity goes from putting in new highs to moving off of those highs. Ultimately, we cannot know what the maximum of any drawdown is until the equity proceeds to put in a brand new high. It can be very helpful to review an illustration. 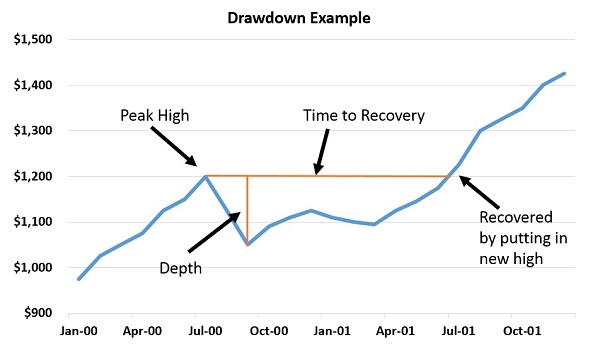 We can now compare the effect that adding Stops & Targets has on drawdowns in the Sector Moderate model. Overall, we found that for this particular model, it reduced the maximum drawdown by a small amount, but it had a significant effect on the frequency and average severity of the drawdowns.
A drawdown chart looks at the equity curve and continuously calculates how far it is off of the all-time high. Sometimes it can end up looking overly negative – even for strongly positive trending stocks and ETFs. Some of this is because we don’t realize, even on a positively trending instrument, how much time it spends not making new highs. Anytime a stock is consolidating or in a side-ways trend, it’s technically a “drawdown” for this calculation, even though it is only a shallow one.
So to read this chart, we are going to focus only on the larger drawdowns. This is consistent with any longer-term trading strategy. Stock prices are going to naturally fluctuate. It is primarily the larger drawdowns and corrections that threaten to diminish our returns or our resolve to continue trading. 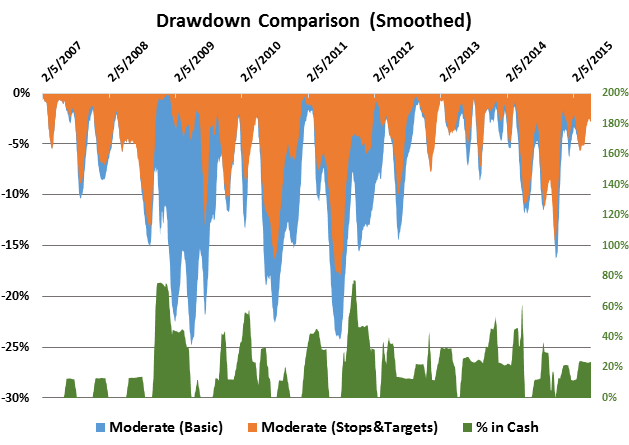 What is immediately striking is that the blue area shows significantly deeper and more frequent drawdowns. The orange area broadly follows the blue, but almost every drawdown is smaller and it manages to largely avoid a few of the drawdowns.
The primary way it mitigates the drawdowns is from moving into cash from profit taking and being stopped out. The green area at the bottom of the chart above tracks the percentage of the portfolio that is in cash at any given time. The right axis (in green ink) shows this percentage.

The average amount of cash in the portfolio might be around 10%-20%, but there were times where it spiked much higher. One of the these times was in early 2009 where the Stops & Targets model reached several quick targets and moved into cash, avoiding the volatility and most of the drawdown to follow.

The Sector Moderate variant with stops and targets matched the basic variant in terms of return and outclassed the basic in terms of volatility and drawdowns. That is one reason we were so confident about adding it to the mix.

We now have three sector variants that, roughly speaking, offer a conservative, moderate, and aggressive levels of risk. From a holistic perspective, the moderate offered the best mix of risk and return, which is why it found its way into the complete.

We are excited to see how these models will play out going forward.


The Current Condition of the Model

There were no position changes this week. Our three positions are FXI, EWH, and EWJ.

Both models are in all three positions.

Stay tuned to daily updates for any position changes.

Here is a summary of the weekly performance of all the ETFs that the strategy monitors. 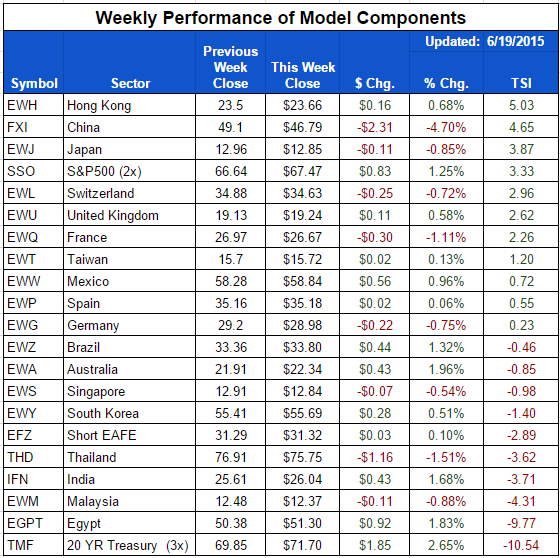