Both ETF Country models closed negative on the week along with the MSCI All World Index benchmark, however their declines were rather muted with all three falling by less than a third of a percent.

We continue to have a lot of divergence between the major indexes in-regards to their phases. QQQ is still clinging to a Bullish phase. SPY is couched between the 200 and 50 DMA. Meanwhile IWM and DIA have clearly broken down below their 200 DMA. All four, however, are towards the middle to low-end of their 2015 ranges. 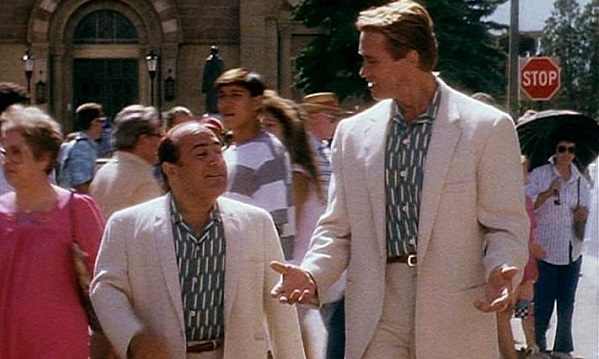 Last week we began a short series on the topic of correlation. It is a topic that permeates modern finance and portfolio theory. And it doesn’t take long to start to realize why.

We all are familiar with individual trades and how they work. You have an entry point, defined stops and targets, and it either reaches the target or you get stopped out. It’s a relatively linear experience. Now imagine having say 20 plus trades of this type on in different sectors and regions and instrument types.

It still might be a relatively simple calculation to determine your maximum risk (if every position was stopped out for a loss), but that “maximum risk” calculation might have very little bearing on your actual risk and what might happen to your portfolio if the S&P 500 made an outsized positive or negative move on a given day.

To get an idea about what effect this move might have on your portfolio, you have to know how each position correlates to the index, i.e., what type of move you can expect in each position and the whole portfolio for an X% move in the SPY.

The actual calculation is fraught with problems though. Correlations are continually fluctuating so it is often more helpful to think about them as probabilities rather than precise relationships. And to make matters worse, when you tend to need the diversification the most, when markets are collapsing, is precisely when the correlation calculation is least reliable.

This is because during times of panic, fear tends to be the dominant emotion and many of the financial actors are no longer thinking about relative valuations and cross correlations but about preserving their capital.

These are important considerations, and we will likely get into them in greater detail in an upcoming article. This week, we are going to look at some of the correlations amongst the major U.S. Sectors. We will focus on how they relate to the SPY. 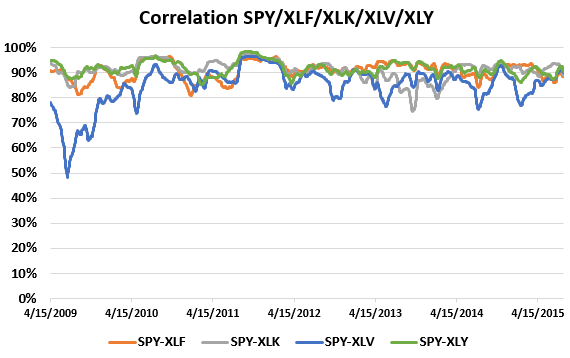 In the chart above you can see some of the broader parts of the U.S. economy, including financials (XLF), technology (XLK), healthcare (XLV) and consumer discretionary (XLY). Aside from a period in 2009, for the most part, these sectors have stayed within roughly a 25% range between just under 100% correlated and down to about 75% correlated.

Since these broad sectors might comprise a high percent of the S&P500, it’s not surprising to see that they generally move together. It would be difficult for any larger number of these sectors to move a great deal without also pulling the index along with them. But there are still important and substantial differences amongst them through time. 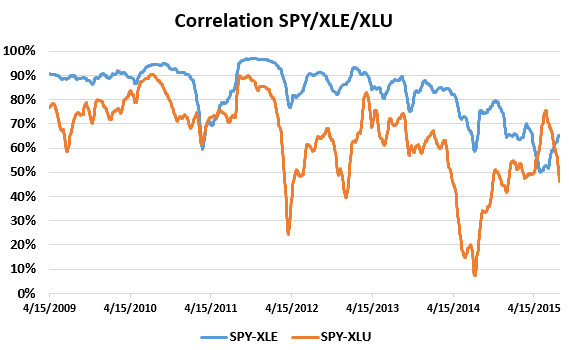 In the chart above, we have focused on just energy (XLE) and utilities (XLU), two sectors that tend to have the lowest levels of correlation. And you can see the dramatic difference between the correlation of these two sectors and the rest (which is why they are often used for diversification).

But you can also see the wide variance. If these correlations held up consistently, it would be relatively easy to construct a portfolio with precise characteristics to minimize drawdowns and ensure the maximum effect of diversification.

Unfortunately, these relationships are constantly influx and you cannot necessarily rely on your diversification and hedges to always kick-in and mitigate your market exposure.

There will be times when most of the sector ETFs are tending to stick together with few if any bright spots. During periods like those, we might see that the top 3 or 5 or 10 ETFs all have very similar TSI scores. Other times we will have a few clear leaders that have separated themselves from the pack.

These differences will not always have much to do with the relative correlations, however, it is important to design your potential holdings so that you have opportunity to take advantage of these relative movements when they occur.

Next week we will continue this series looking at some of the unique diversity of ETFs in the Global Macro strategy.

The Current Condition of the Model

Our three positions are EWJ, SSO, and EWQ.  Both models are in full-size positions of all three.

Stay tuned to daily updates for any position changes.

Here is a summary of the weekly performance of all the ETFs that the strategy monitors. 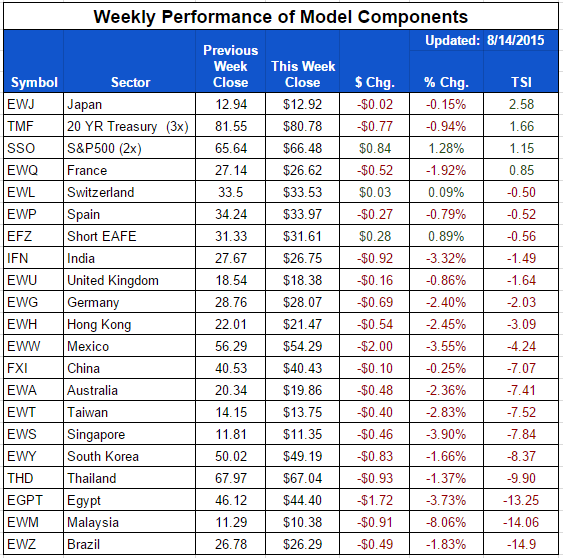