The ETF Complete model closed the week up +3.9% compared to the SPY which closed up +2.2%.

Stay tuned for the daily updates and log into the website to see holdings and additional performance data.

This week we continue our series on rolling returns and relative performance.

For a quick review, rolling return charts are just one of many different ways to measure performance. The principal advantage of using them over traditional charts is that they make it very easy to see the relative performance of a strategy during different periods of time because a rolling period return chart is continually rolling the return period forward, normalizing the data to a common relative scale.

For instance, simply looking at equity curves, it can be difficult to compare performance over smaller periods or market cycles if the performance of the two differs significantly over time because the curves might not overlap, or the period percentage moves becomes distorted by the overall percentage move. 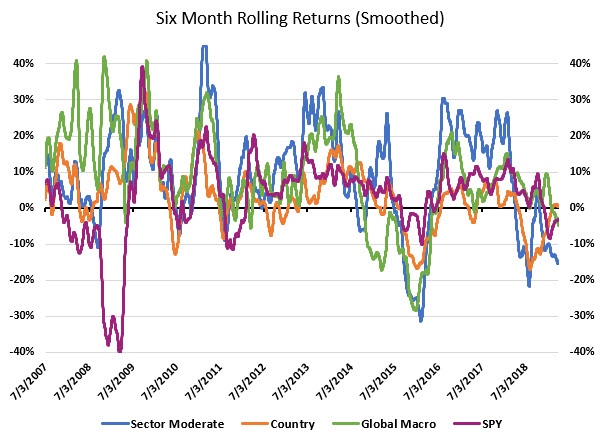 The chart above shows the six-month rolling returns for the three model in the ETF Complete (Sector Moderate, Country, Global Macro) and the SPY index. Six months is a good time-frame for showing many market cycles. Some longer-term cycles will show up better on a 12-month rolling period.

The SPY tends to spend most of its time in a range from about -10% to +10% on a rolling six-month basis. There are periods where it can dip much lower or higher. In 2007-2009, the financial crisis sent markets reeling and the SPY put in the worst return going in and had a strong recovery coming out of the crisis.

The most recent period has been tough, both for the markets and the ETF models. With the exception of the Global Macro, both the country and Sector models have lagged the market, though they have been doing better over the last couple weeks.

Periods of lagging are unavoidable and a necessary consequence of trading instruments with higher volatility and beta than the overall market. One thing that sets the ETF models apart from other high beta strategies is the inclusion of specific money management rules that help avoid the major market corrections.

There are some high beta strategies out there that will tend to outperform during strong periods, but they also will get killed during prolonged bear markets. Our ETF models are designed to avoid these major pitfalls and performed well during the deeper corrections in 2008, 2010, and 2011.

While we never know how long a period of underperformance might last, we tend to see the models bounce back from these periods. The average 3-month out performance of ETF Complete when its gone through one of these periods is +1.5% compared to the SPY average of +0.5%. The Sector Moderate, with its higher volatility, averaged +4.4% over the following three months.

Next week we will wrap up this series looking at more detailed numbers and performance expectations for the ETF models after different periods of lagging or leadership.